The world celebrates the UN Peacekeeping Day today, the 29th of May, but it hardly garners attention anywhere except in the camps of 16 operation bases around the world where the Peacekeeping force is striving to bring stability, establish the rule of law and end conflicts without resorting to war. 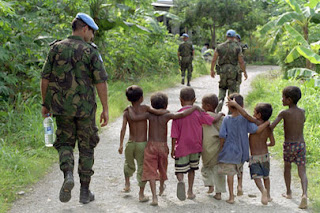 Strife is a global phenomenon and even now multiple armed conflicts are in progress either in the form of ethnic clashes, civil war, terrorism, dictatorships, coups or full scale war. More often than not, it is superpowers that intervene by either coercing or forcing both parties to co-operate and act as mediator but it may also happen that these nations may take sides in these conflicts.

This is the time where the need for a global non-partisan peacekeeping force betrays its importance. The UN Peacekeeping Force, comprising of personnel from all over the world, is the perfect third party to bring about a resolution to conflict.

The biggest contributors to the force are not the nations you expect. Expect surprises in the figures below which have been sourced from the UN website. These are the total number of personnel contributed by the nation:


Well, wasn’t that a surprise? Apart from the fact that none of the five nations that comprise of the United Nations Security Council feature in this list, the fact that the nations of the Indian sub-continent rank in the top 6 certainly show how much these nations and African countries who complete this list actually strive for world peace in spite of claims that they don’t contribute to the war on terror.

Although China makes it to the 11th rank in the list of contributors to the Peacekeeping Force, the rest of the Big 5 are nowhere near. Here are the contributions of the Permanent seat holders in the UNSC:


This however, is not a condemnation of nations but a realization that those on whom the least expectation is placed often turn out to be front-runners in hindsight. It must also be noted that although these ‘developed’ nations my not directly be involved in the peacekeeping Force, they are the ones leading the alliance against major terrorist forces in the world today.

Although the force of arms is hardly the correct way to bring about peace, it is sometimes required to bring to sense to those who would prefer violence over cordial means and chaos over stability to establish control. This makes the UN Peacekeeping Force not just an interlocutor but a necessity in these times of grave turmoil.

On this day, the world should remember the lives given for the greater good of the world. People in conflict zones are actually thankful for the role these brave men and women have played in bringing some amount of calm to their days of unending warfare and nights filled with sobs stemming from constant nightmares. These angels of peace in Blue are worthy of the respect and reverence reserved for the highest form of sacrifice above and beyond the call of duty.
Posted by Brendan Dabhi at 8:33 pm

Flavour of the Month

What Do You Need?

You're not just a Number

Where they came from